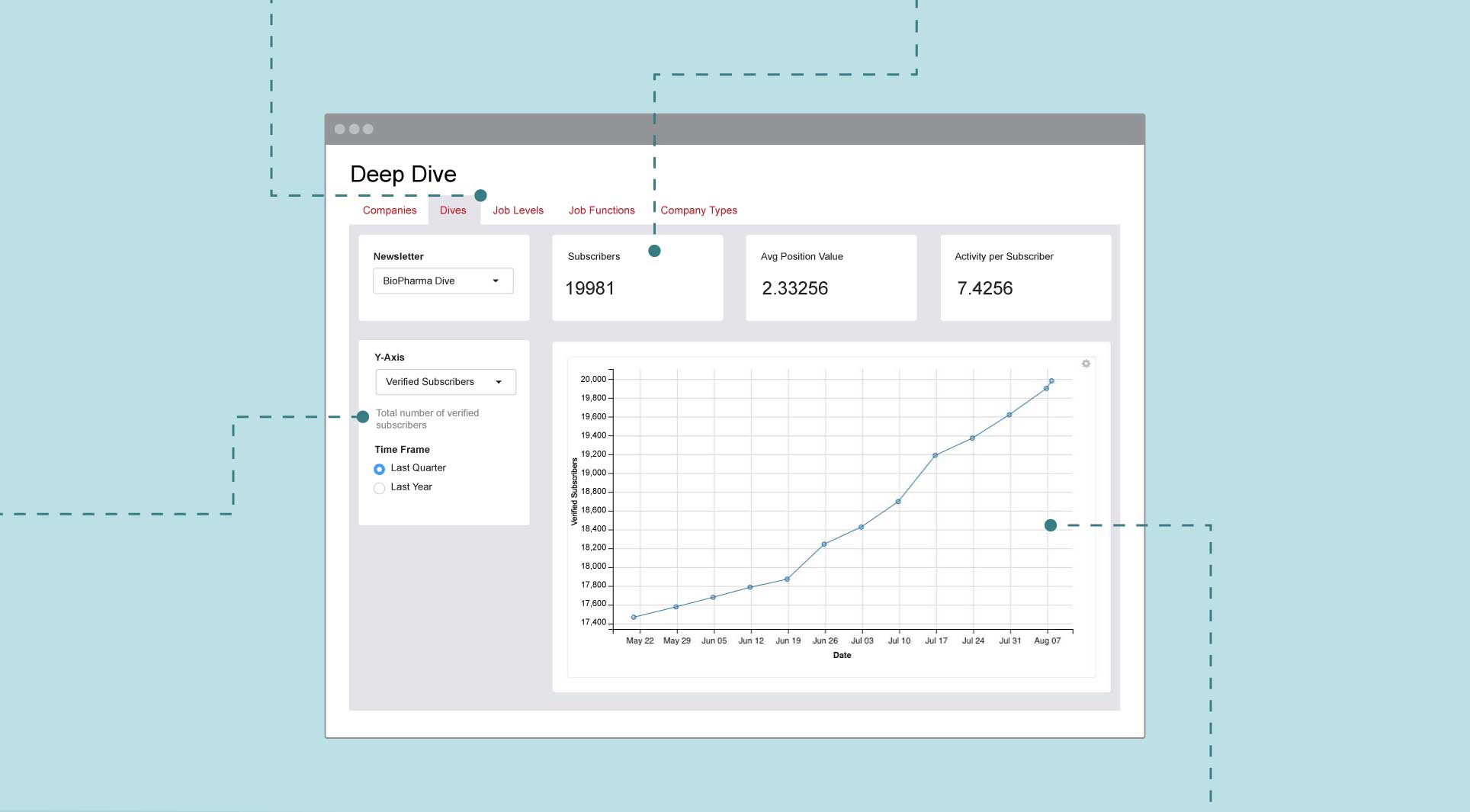 Industry Dive visualizes and aggregates subscriber data for its sales, ad operations and audience development teams. The data the teams analyze is hosted on “Data Dive,” an internal site built on Shiny, an open source R package. Data Dive allows team members to see information about our subscribers through tables and graphs.

While the app was informative, it was not customized to our internal users. Before I began redesigning the application, I conducted usability interviews with our teams. The tests informed me on current user flows and pain points in users’ processes. I split user feedback into two categories — increasing visual appeal and creating an accessible and responsive interface. I solved these challenges using HTML/CSS and features already available in the Shiny package.

To start, I brought in internal users and asked them how they use the site. I tried to interview at least one stakeholder from each department — sales, editorial and c-level executives. For the interviews, I adapted a standard list of talking points and questions to ensure my interviews were consistent and thorough. The interviews included five parts:

From this process, I found many areas for improvement. While each user had different feedback, these were the large overlapping takeaways:

The users didn’t care about the graphs. When they use the site, they want to see the raw data. While all of the data is helpful, there are no cumulative data statistics. They are always broken down in some manner, neglecting the entire picture. A lot of the features are not intuitive and the user doesn’t use specific features because they don’t understand them.

After determining the user’s pain points and ideal UI features, I defined my proposed solutions and split them into different requirements. This was a three-step breakdown as the interviews resulted in a lot of data to parse. The first sorting of requirements split them into two buckets, front-end and back-end. I could address the front-end issues quickly while the back-end issues would need to be saved for later.

I then further divided the front-end issues by labeling them as either a priority or reach goal. This allowed me to note ideas that could be beneficial in the future but might not be feasible in the short term. Once I began working on the issues, I realized they could be sorted into two different UX goals, visual improvements and accessibility improvements. Both categories would require me to use HTML/CSS and Shiny app interface tools.

The visual improvements involved increasing visual hierarchy and emphasizing the important data the user needed. To create these style improvements, the first challenge was to incorporate an external CSS sheet. To do this I used ported SASS files for Bootstrap, because Shiny apps are built on Bootstrap, which uses LESS. Because Industry Dive uses SASS for web design, I figured it was best to use it for styling.

In addition to overriding basic Bootstrap styles like typography sizing and colors, I made a few additional UI changes to increase visual appeal:

The accessibility improvements focused on making the web application as intuitive as possible. For example, the web application is pulling so much data, there is a delay before the user can interact with the different features, which caused confusion. To prevent this confusion, I implemented an overlay to show that the app was loading and the user could not yet interact with the app.

Additionally, I increased the usability of sorting and interpreting the tables:

Together, these improvements made Data Dive significantly easier to use. While there is still a list of back-end requirements that could provide the app with even more functionality, many of the issues were solved with the front-end improvements. Now the app provides a much friendlier user experience and allows users to accomplish their tasks in fewer steps.